Here's wishing all my readers a beautiful new year's day!

It is always a pleasure when the carefully curated Glomag is published. A meeting place for numerous poets, this magazine is a collection of excellent poetry and I always feel honored to be included.

Here is my poem. Written mid 2022, this is a piece on connections between us as humans, even as we say different goodbyes. 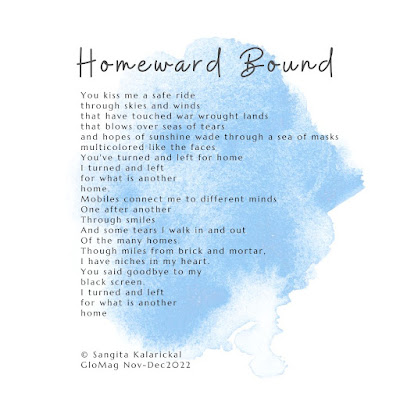 A split sequence is basically three haiku that links with the lines of one central haiku.

This was my second time collaborating with Reid, and we wanted a mellow mood with the ocean and its various avatars. Layers upon layers of different feelings surfaced.  These were mostly haiku. We were going to send it to a senryu journal failed haiku but somehow it worked, the editor liked it enough to accept it. 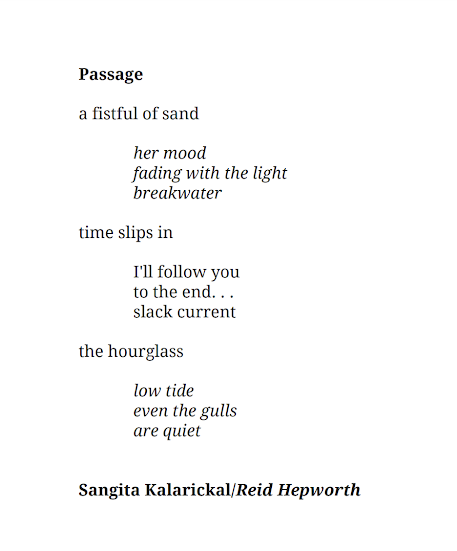 Working with another poet, is supposed to be slightly challenging, since we poets are at the very least emotional, temperamental and creative. Our creative boundaries are fluid and the mere feeling that it may get encroached upon gives us shudders. But none of these with Reid. Such a wonder to work together. That is the essence of a good human being. I am so lucky to have such a good friend.

Here is the full issue of failed haiku #79, enjoy!

Posted by Sangita Kalarickal No comments:
Email ThisBlogThis!Share to TwitterShare to FacebookShare to Pinterest 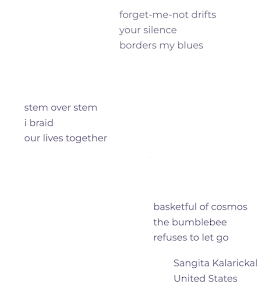 I've always felt that if something happened three times, it's a sign of sorts. So when my haiku got featured three weeks in succession, I looked for meaning behind it. For yours truly, whose confidence is usually skimming the bottom of the barrel, who usually has a bad case of the imposter syndrome, this felt like a huge sign. Not a neon one blazing on all its batteries but a muted Batman sign reflected off a dark, cloudy sky. I'm probably ok. The 'ku were selected for publication in The Haiku Dialogue of The Haiku Foundation. Such a thing may never happen again, I may not be selected again, but that's a topic for another day.
Here's the site where you can find poems from really wonderful haijin; have a dekko.

Sangita Kalarickal
Wordsmithing in the form of poetry and fiction writing is an exciting journey. I love using my words to create new worlds, paint different characters, voice my emotions and opinions. All this helps me sharpen some of the skills I don’t get to use much in my day job as a physicist. This blog is about my creative journey. Sometimes, they are little stories. Sometimes, they are random thoughts and places I stray into, the characters I meet, and the hurdles I scramble over. Always, hopefully, an interesting short read.